The Emerald Table of Hermes 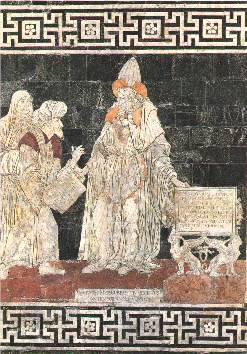 And as all things were from One, by the meditation of One, so from this One Thing come all things by adaptation. Its father is the Sun, its mother is the Moon, the wind carried it in its belly, the nurse thereof is the Earth.

It is the father of all perfection and the consummation of the whole world. Its power is integral if it be turned to Earth.

Thou shalt separate the Earth from the Fire, the subtle from the coarse, gently and with much ingenuity. It ascends from Earth to heaven and descends again to Earth, and receives the power of the superiors and the inferiors.

Thus thou hast the glory of the whole world; therefore let all obscurity flee before thee. This is the strong fortitude of all fortitude, overcoming every subtle and penetrating every solid thing. Thus the world was created. Hence are all wonderful adaptations, of which this is the manner.

Therefore am I called Hermes the Thrice Great, having the three parts of the philosophy of the whole world. That is finished which I have to say concerning the operation of the Sun.

This is the only surviving fragment of the Emerald Tablets that has been found; other claimed works are spurious. The second and fourth paragraphs contains the so called "secret" of alchemical transformation. In the Gurdjieff Work this is known as the Law of Three or The Holy Equation and forms the basis of all spiritual work. While it is implicit in the practices of many traditional spiritual disciplines, it is explicit in the Gurdjieff Work. The Seeker who masters the technique is released from the rote repetition of traditional practices and is able to adapt any activity in daily life into an opportunity for spiritual transformation.

In Gurdjieff 's own words (From Enneagram Lecture) :

Will a man unacquainted with this system of symbols understand a great deal if he is told that the knowledge of unity by the means of self-knowledge and self-perfection for man is the neutralization of the binary by the ternary and its transmutation into the quaternary in order to close the pentagram and realize the "Seal of Solomon"?

Gurdjieff , in his book "All and Everything", presents the formula in the form of a prayer :

The seven stages of alchemical transformation given in the Emerald Tablet -

Calcination Its father is the Sun.
Dissolution Its mother the Moon.
Separation The Wind carries it in its belly.
Conjunction Its nurse is the Earth.
Fermentation Separate the Earth from Fire, the Subtle from the Gross.
Distillation It rises from Earth to Heaven and descends again to Earth.
Coaglation Glory of Whole Universe; greatest Force of all powers.